Ok, I could not go back North without going back to Huddersfield. After all, I spent an amazing 15 years there. Therefore, I decided to take my son to visit is home town football team. I contacted the club and they very kindly agreed to take us behind the scenes. It was a great experience and nice to get back to what I would call a more down to earth dressing room :). It was also our first non-top flight stadium tour.

Huddersfield Town Association Football Club is an English association football club that is based in the West Yorkshire town of Huddersfield and currently play in the Football League Championship (2015–16).

In 1926, Huddersfield became the first English club to win three successive league titles, a feat which only three other clubs have matched, and none has bettered. They also won the FA Cup in 1922.

Nicknamed The Terriers, the club plays in blue and white vertically striped shirts and white shorts. They have played home games at the John Smith’s Stadium since 1994. The stadium replaced Leeds Road, Huddersfield Town’s home since 1908.

It seats 24,499, people along with hospitality boxes and conference rooms. There are four stands. The main stand, the Revell Ward Stand or Riverside Stand incorporates two-tiers of seats, with a row of 26 executive boxes running between them. This stand also houses the offices and suites. The LV= Britannia Rescue Stand, opposite the Riverside and commonly referred to as the Kilner Bank Stand, is a large, single-tiered stand which seats over 7,000 spectators. It was previously sponsored by John Smith’s and is still called this by many today. The John Smith’s South Stand, which seats 4,054, is usually allocated to away fans. It is built into natural banking and is the most basic of the stands. The Fantastic Media North stand is the tallest stand with two tiers, 16 hospitality boxes and a viewing room for players’ guests, built into the leisure centre. The lower tier consists of temporary seating that can be removed for events such as concerts.

During planning and construction, the stadium was referred to as the Kirklees Stadium. It was built by Alfred McAlpine (same than Bolton Wanderers), designed by HOK Sport and was awarded the RIBA Building of the Year award for 1995,

The decision to build a new stadium for Huddersfield Town was made in August 1992. Construction began the following year and it was completed in time for the 1994–95 season, enabling the club to move to its new base after 86 years at Leeds Road.

When the stadium opened only the two side stands (the Riverside and Kilner Bank stands) were ready. The South Stand was opened in December 1994. Construction on the North (Panasonic) Stand began in 1996 and it was completed in 1998, bringing the overall capacity of the stadium to approximately 24,500. The estimated cost of construction was £40 million.

It lasted 30min, which was more than enough for the little one after the morning session. The Lady that took us was lovely. We made our way to the reception (not the megastore!). We were greeted by an electronic board (See below), it felt like a truely personalised stadium tour experience. 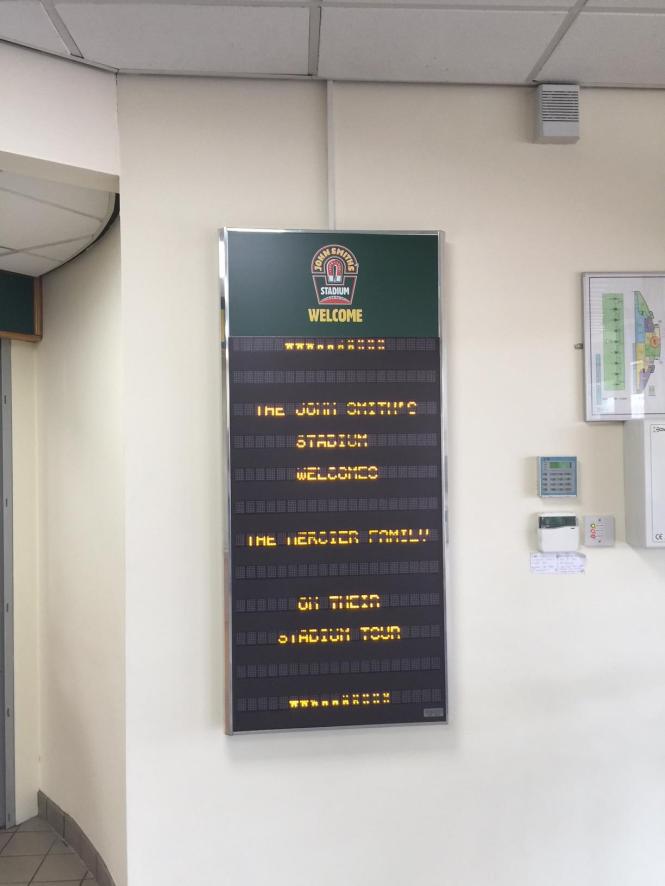 We visited the boxes, the restaurant, which were of a basic standard. We then went onto the pitch, that costs £750k, and his an absolute beauty. The stadium is very nice, when you think that not so long ago they were in League 2.

We then went to the home dressing room, which was kitted for tomorrow’s game. I loved the dressing room. Very much like the ones that I am used to from my playing days. Benches made of wood, kit bags everywhere, which leaves little room to move around. Love it.